There are 3 main differences between masculine and feminine foreheads:

1. The most important difference between them is that masculine foreheads tend to have a ridge of bone running right across them at about eyebrow level called “brow bossing” (sometimes called “frontal bossing” or “the brow ridge”) while feminine foreheads tend to be smoother and flatter and have little or no bossing. The bossing here has 2 parts to it – the “frontal sinus” which is in the middle, and the “orbital rims” which sit above the eyes (sometimes called the “supraorbital rims”).

Brow bossing affects the expression of the face so a person with a masculine forehead usually looks harder or more angry, as opposed to the softer and more open expression that you tend to see with feminine foreheads.

2. The vertical ridges running up either side of the forehead (temporal ridges) and the rounded bumps on either side of mid forehead (frontal eminences) tend to be more pronounced in males.

3. Male foreheads often have a slightly backwards slope to them while female foreheads tend to be more vertical.

The orbital rim is usually solid bone and can simply be ground down. The surgeon can also open out your orbits to give you a more open, feminine expression. This is done by removing a little bone from the underside of the orbital rim and it has the additional effect of exposing more of your upper eyelids.

The temporal ridges and frontal eminences are solid bone too, and can be ground down in the same way as the orbital rims.

The middle third or so of the bossing is where you find the frontal sinus which is a hollow, air-filled cavity, and it is much more difficult to remove the bossing here. If the sinus has a thick wall of bone at the front, the bossing can, in theory, be removed by simply grinding down the bone, however in most people, the wall of bone is very thin, and that means it is not usually possible to grind the bossing away completely without breaking through it into the sinus. This would leave you with a hole in the forehead,

Here is a cross section through the skull so you can see the hollow frontal sinus clearly: 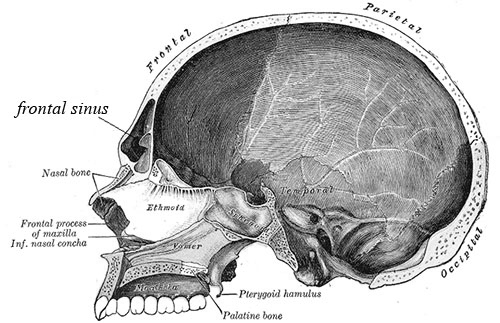 There is a debate about how the frontal sinus should be dealt with (more on that below in “The Great Forehead Debate” section) but first, here’s a description of the 2 main approaches that surgeons take to this area:

1: Shave and Fill
Some surgeons grind down the wall of bone as far as possible without breaking through into the frontal sinus, and then build up the area around the remaining bossing with bone cement. The bone cement smoothes out any visible step between the bossing and the rest of the forehead to give a smooth appearance.

2: Forehead Reconstruction
Other FFS surgeons perform a procedure called a “forehead reconstruction” where the wall of bone is removed and reshaped, then the area around the sinus is ground down, before the wall of bone is fixed back in a new feminine position with titanium microplates and screws (older techniques use wires instead of plates and screws).

It’s a bit like turning a 2 storey house into a 1 storey house by lifting off the roof, then removing the top floor before putting the roof back on.